A night with Jaunty Jackalope

May 24, 2009
What's that? Kinda unfamiliar name. It is not a brand for candy, but a newest Ubuntu (the most famous Linux distro). The name does not give any hint nor strength to be a good marketing jargon. Anyway, the name represents the tradition of Ubuntu's natural intimate. Look at these predesessors, gutsy gibbon, hardy haron, intrepid ibex. You may look at the resemblance, yes G-G, H-H, I-I, and now J-J.

Anyhow, once more, name doesn't represent its capability, which I can say, another pinnacle O/S made by Ubuntu. Starting with around 20s to login screen (fresh, default install on my lapie: Toshiba Core Duo 1.73Mhz with 3Gigs RAM), the first impression, impressive! This is way beyond expectation, a descent, stable looking, and fast O/S with EXT4 partition type enabled (acclaimed to boost performance of some percents compared to the previous EXT3).

Since the release of Ubuntu 7.04 (Feisty Fawn), there was practically no successor can match its performance until J-J. Well, here are the sums of my experience after one night dating with this new Ubuntu release:

1. Installer seems faster than the most awaiting Windows 7, except for slow partition detection which I think can be improved.

2. No driver needed, all devices detected smoothly! I got areport of new installation on a descent (2008 edition) of Dell with the newest Centrino chipsets (not like mine!), everything is alright. From ethernet, bluetooth, CPU scaling, wireless, and you can name others! However, on a system of Acer AMD Turion 64, some configurations need to be hacked (like Atheros wifi, sound - altough it was working but in sub par performance compared to that in Windows system). Regardless the small glitches in AMD system, the sound in my lapie does impressive. The TruSurround capability of Realtek chipset seems working well.

An update: They (the Canonical) need to fix a problem in FLV codec as it will trigger the sound server (Pulse Audio) to an error state. Another problem is with the OSS sound driver, which refuses to work.

3. EXT4! It runs perfectly in my lapie (I consider myself as a power user, with many tweakings to satisfy my needs in computing).

4. Faster booting, better memory management. It took less than 200MBs of RAM when the desktop firstly appeared on screen (I use 19" wide/1440x900 resolution monitor with the same size of wallpaper, Mac4Lin RC1 theme, and Avant Windows Navigator along with Compiz) The previous release took slightly more than 250 MBs on almost the same setting. Booting (as recorded with bootchart) gave 20.4s prior to GUI login screen appeared. 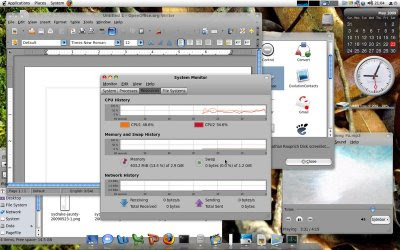 It looks cleaner than the Ibex. However, it still has the same problem with multimedia. You can't play MP3, SWF (shockwave), FLV (streaming flash) on the first moment. To install gstreamer-plugin (now it under a name of gstreamer-plugin-bad), setting up medibuntu.org repostory and adding up a few codecs are the requirements to play multimedia seamlessly. This is inconvinient for first time user! Gave a bad impression at the first sight (regardless of Legal issue that is always be a reason).

I give a huge credit to Gnome (My buddy says KDE is eye candy!). Gedit runs beautifully, in a matter of eye's blink. I also thanks to Sun (or Oracle) for its Open Office 3.0 which I think faster, better, but also slightly less heavy (in my opinion!).

So, with current configuration (EXT4, the latest kernel patch [2.6.28-12], and many customized settings) I found a fresh moment to play with Linux again.
notebook ubuntu tips

This is a close to final version of my triplet NTC thermistors incubator with multi-buttons on a single analog input and double digits 7 segment output.  You may read part1 and part2 , for the whole story. On a separated article, I replaced NTC thermistor and 7segment with LM35 probe and LCD 16x2,  here . Hardware setup I use  Arduino standalone on breadboard , common anode double digits 7 segment  16 pins, two 74HC595 s, three NTC thermistor s, an FTDI 5v uploader ,  an optocoupler protected relay module , resistors (10kΩ, 1kΩ, 4k7Ω, 470Ω, 220Ω and 47Ω), and push buttons. Since the 7 segment that I purchased has no datasheet, it is important to look at other version of common anode (tandyonline.co.uk): The final setup on breadboard: The codes You may grab the codes here What next? Obviously, the next step is to print a PCB ( there is a great tutorial  on the Tube, or if you understand Bahasa Indonesia, here is a great tutorial from Duwi ) for this project and to
Read more